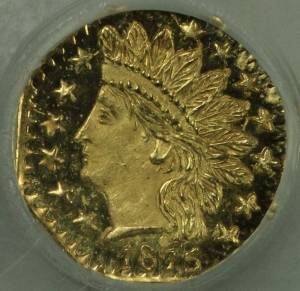 American history has frequently been one of fads and extremes, and the fifth decade of the nineteenth century gives us another fine example: the California Gold Rush. While Americans had been moving westward almost since they put foot on Plymouth Rock, on January 24, 1848, at the time gold was discovered at Sutter’s Mill, what we know today as California was a part of Alta California, a Mexican territory. San Francisco was tiny; only 200 people lived there in 1846.

That changed almost overnight. Despite the fact that there was at the time no straightforward or fast way to get to the West Coast from the East, a flood of Americans and immigrants set off by ship traveling either all the way around the tip of South America or down to Panama, overland, then up the coast via the Pacific Ocean. Others drove wagons west on the California Trail. The influx of 300,000 people from all around the world created a number of problems, and one of them was currency.

Only a limited number of people struck it really rich because of gold during this rush, and John Sutter, who owned the land where the first gold was discovered. was actually ruined by it. But there was money to be made anyway. All of the people showing up needed food, housing, equipment, and various sundries in order to seek out their fortunes. Boom towns rose from nothing to accommodate them. By 1852, San Francisco had about 36,000 people.

Today a stable currency is very underappreciated. It allows for the peaceful transfer of goods and services and a quick and easy way to accomplish many everyday goals. However, in California from 1848-1854 there wasn’t enough of it to go around. The state didn’t even become a part of the U.S. until 1850, so the currency in circulation was as diverse and foreign as the people flooding the region.

To address this shortage, California fractional gold coins were privately minted. These coins were either octagonal or round and came in denominations of 25 cents, 50 cents, and $1. The designs used included a Washington head, an Indian head, and a Liberty head. True California fractional gold pieces have the words  DOL, DOLL, DOLLAR, or CENTS on the reverse side. Coins with a bear on the reverse are not genuine fractional gold; they are tokens - commemoratives minted mostly by jewelers after the fact and are collectible in their own right.