Although the exact details of these coin thefts are not the same, the big picture is the same… significant coins were “lifted.” Ironically, one party realized significant consequences, and the other has suffered none. Is that fair?

In one case, 20 of the 1933 St. Gaudens gold coins destined for melting were stolen from the Mint in 1933, coming into the hands of now-deceased jeweler, Izzy Switt. The US Government sued Mr. Switt’s heirs to recover the remaining 10 coins, valued at millions of dollars each, and won the case in July, 2011.

In the second case, 14 of 16 examples of a new aluminum Lincoln cent loaned to members of the House and Senate Banking Committees for study in 1974 were never returned to the Mint. At that time, Washington columnist Jack Anderson wrote, “It looks suspiciously as if some distinguished members of Congress have sticky fingers.” Then-Mint Director Mary Brooks chose not to pursue their return for political reasons.

So, on behalf of the “People of the United States of America,” the US Government spared no expense to reclaim the 10 rare $20 gold coins from private citizens, but turned a blind eye to the known disappearance of 14 rare coins by US Congressmen. Does anyone else see the irony in these divergent decisions?

The 1933 $20 Saint Gaudens theft: In 1933, President Franklin D. Roosevelt issued “Executive Order #6102,” calling for the return of US gold coinage to the US Government. This order led to the Gold Reserve Act of 1934 which outlawed the circulation and private possession of US gold coins. The 1933 Saint Gaudens were never actually monetized (ie. issued by the US Mint), and with the exception of two examples kept by the US Mint for the US National Numismatic Museum, all 445,000 were to have been melted. It became apparent that approximately 20 were stolen from the Mint, most all making their way into the hands of jeweler “Izzy” Switt.

Over the years, as they turned up, nine of these coins were confiscated by the Secret Service. A 10th coin was sold to King Farouk and legally shipped to Egypt. Years later, the US Justice Department settled a lawsuit regarding that one coin. That coin later sold at public auction for $7.6 million-- the highest price ever paid for a US coin. The US Government received half the proceeds.

In 2009, Izzy Switt’s heirs, the Langbord family, went public about their possession of the 10 remaining examples. With legal advice and the outcome of the King Farouk example, the family delivered the coins to the US Mint for authentication. Having determined they were real, the Mint confiscated the coins. Due to the expiration of the statute of limitations, the Justice Department could not pursue criminal charges against the Langbords. The family, however, sued and lost in a civil jury trial. 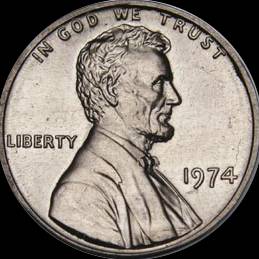 The 1974 Aluminum Cent: Due to the dramatic increase in copper prices in 1973, the US Mint began to experiment with an aluminum alloy. Mint records show 1,571,167 1974-dated pattern aluminum cents were struck in anticipation of release. Sixteen examples were given to various members of the House and Senate Banking Committees, and 14 of them mysteriously disappeared.

In Numismatic News, 5/3/1975, Washington columnist Jack Anderson wrote that “this has created an awkward predicament for the US Mint, which has tried ever so delicately to retrieve the rare pennies from the Senate and House banking committees. These are the same committees, you see, which have jurisdiction over the Mint.” Anderson went on to say that Mint Director Mary Brooks had considered turning the matter over to the Secret Service, but had thought better of the idea, because “she was reluctant, understandably, to instigate an investigation of the committees that oversee her own operations.”

Don’t Congressmen have to obey their own laws?

In the first instance, the Secret Service only found out about the existence of the remaining Saint Gaudens coins because the Langbord family told them. The Secret Service then did their job—confiscating the coins.

In the second instance, The Mint, Treasury, and Secret Service knew all along who held the missing Aluminum Cents— 14 US Congressmen and Senators. However, they chose not to pursue action for the cents’ return because of power held by these legislators.

It’s not too late… it’s likely some of Aluminum Cents are still in the possession of the former Congressmen or their heirs. The Mint Director must ask the Secret Service to diligently investigate the “lost” 1974 aluminum cents. As history shows, the Government has aggressively pursued the stolen Saint Gaudens on behalf of the “People of the United States of America.” We, The People would like to see an end to the special privileges accorded our elected officials.

If the US were to recapture the aluminum cents, I would advocate “monetization” and public auction of those coins to create millions of dollars for the “People of the United States of America.”